Few bodies, which have drifted to Rudraprayag and Srinagar districts due to the Alaknanda river’s heavy flow following glacier burst in Uttarakhand, Chamoli Police said on Wednesday.
The rescue operation is underway inside Tapovan tunnel in Uttarakhand’s Chamoli.
Meanwhile, ITBP personnel were seen carrying ration to villages, which have been cut off due to glacier burst and traversing through mountainous terrain in the state. 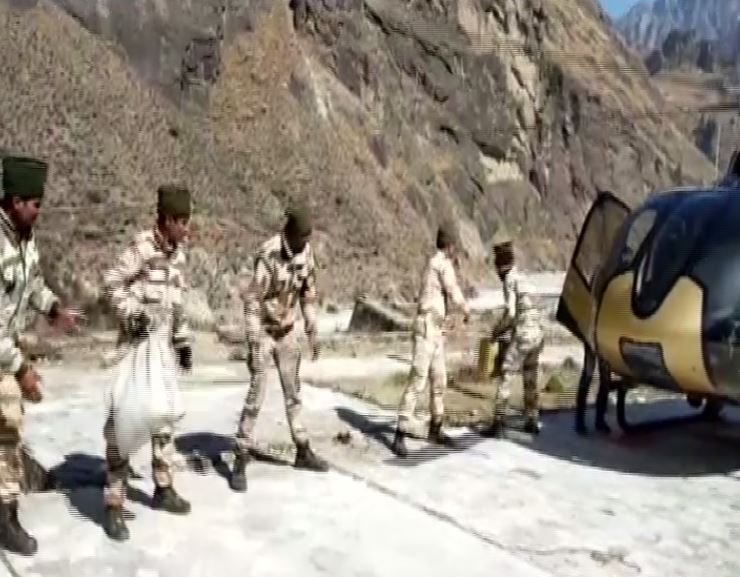 There is not much progress in the ongoing rescue operation following the glacier burst, said Uttarakhand Director General of Police (DGP), Ashok Kumar on Wednesday.

Out of 32 bodies that have been recovered — 8 have been identified while 24 are still unknown. The rescue teams have also recovered two Uttarakhand Police personnel bodies.
“Not much progress in the rescue operation. We have recovered 32 bodies, 8 identified, 24 unknown. The rescue team also recovered 2 Uttarakhand Police personnel bodies. Cannot confirm the exact number for missing and dead people but it is between 192 and 204,” Kumar told ANI.
Speaking about the challenges being faced by the rescue team, Aparna Kumar, DIG Sector HQ, ITBP, Chamoli said: “The challenge we are facing is that debris and slush are coming out from the tunnel. Machines to continue to work inside the tunnel. We need to progress carefully as water with high pressure might come from inside the tunnel.”
A team of Indo-Tibetan Border Police (ITBP), National Disaster Response Force (NDRF), State Disaster Response Force (SDRF), and other agencies continue to conduct rescue operation inside Tapovan tunnel, Uttarakhand on the third day today.
A meeting of all agencies including senior officials of ITBP, NDRF, Army, and local administration has been called today to decide further course of action.
A glacial broke in the Tapovan-Reni area of Chamoli District of Uttarakhand on Sunday, which led to massive flooding in Dhauliganga and Alaknanda rivers and damaged houses and the nearby Rishiganga power project.

On the occasion of 'Haifa Liberation Day', Minister of State for Civil Aviation, General (Retd) VK

IIIT Hyderabad has opened winter admissions for a new M.Tech program in Product Design and Management. The