The Nehru Institute of Mountaineering (NIM) on Thursday said that a total of nine bodies which were trapped in the Uttarkashi avalanche have been recovered and retrieved till now, while 29 other trainees continue to remain stranded.

According to the NIM, the nine bodies retrieved today include four dead bodies that were already brought down on Tuesday (October 4) and Wednesday (October 5). 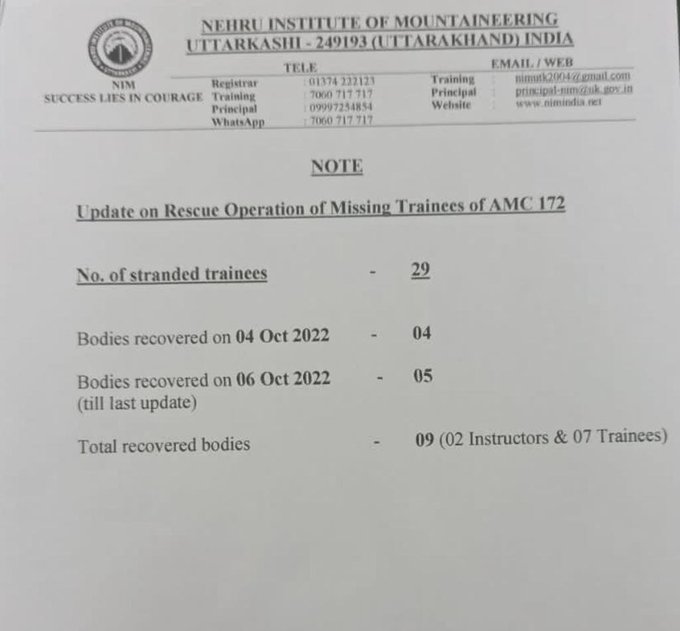 The update on recovered bodies came hours after a team of experts from Gulmarg in Jammu and Kashmir, High Altitude Warfare School (HAWS), joined the operation with the National Disaster Response Force (NDRF), State Disaster Response Force (SDRF), Indo-Tibetan Border Police (ITBP), and NIM to rescue mountaineers that were stranded on Draupadi’s Danda-II mountain peak in Uttarakhand’s Uttarkashi after the avalanche hit them on Tuesday.
However, more teams have been sent to the advance base camp from ITBP Matli in Uttarkashi.

An advance helicopter landing ground was also prepared at 16,000 ft and a trial landing was successfully conducted in the morning.

According to ITBP PRO Vivek Pandey, the advance helipad has been made at high altitude and helicopters are out for rescue operations.

“The dead bodies are present at the base and some of them are expected to be brought down today itself,” the ITBP PRO said adding that the measures are being hampered due to bad weather conditions but efforts to find the missing mountaineers is still underway.

On Wednesday, the survivors of the avalanche in Uttarkashi narrated their horrific experiences.

Deep Thakur, a trainee from Gujarat, who survived the accident while undergoing treatment at the district hospital, said that the avalanche came all of a sudden while he was climbing to Draupadi’s Danda Peak for a summit at around 9.45 am, due to which he along with his companions fell into the crevasses about 60 feet deep, where he struggled between death and life for about 3 hours.

Another survivor, Akash Lalvani, a trainee from Mumbai, told that he was only about 100 meters below the summit of Draupadi’s Danda and the only plan was to summit the peak and get down after being photographed there, because the weather was also clear. But the sudden avalanche has left them with an unforgettable sorrow.

On Tuesday, about 41 trainees and instructors of the Nehru Institute of Mountaineering were in the grip of Draupadi’s avalanche in Danda of Dokrani glacier at an altitude of more than 5,000 meters.

In view of the safety of the trekking and mountaineering teams in Uttarkashi, district magistrate Abhishek Ruhela on Thursday banned trekking activities here for the next three days.

Ruhela has banned these activities in Uttarkashi from October 6 (today) to October 8 (Saturday) ahead of the India Meteorological Department’s alert for intense rainfall in the state over the upcoming days. (ANI)

The Uttarakhand government has extended the tenure of its Uniform Civil Code Committee by six months, said officials on

Uttarakhand: Army Chief to review IMA passing out parade on Dec 10 in Dehradun

A shameful case has been reported from the Jagjitpur area of Kankhal in Dehradun. A

Uttarakhand: Shiva garden and four contemplation places will be built in Kedarnath Dham