The numbers say it all. Data given in the Reserve Bank of India’s Study of State Budgets puts total receipts of all states with assemblies (including Jammu and Kashmir) in 2019-20 at Rs 39.2 lakh crore.

The document was released in September last year. Rs 31 lakh crore of this amount was expected to come from revenue receipts and Rs 8.25 lakh crore in capital receipts.

These are all Budget Estimates (BEs). Of the Rs 31 lakh crore in revenue receipts, Rs 8.5 lakh crore, almost 22% of the total receipts, was to come from transfer of taxes from the Centre.

This figure is very close to Rs 8.45 lakh crore promised under BE figures of Net Proceeds of Union Taxes and Duties to states in the 2019-20 Interim Budget of the Centre, which was presented in February last year.

By the time the government presented its final budget in July 2019, this amount was slashed to Rs 8.1 lakh crore.

In this year’s Budget, the Revised Estimate (RE) figure for 2019-20 under this head is Rs 6.6 lakh crore, only 77% of the promise made in the Interim Budget.

Here’s the nub: These two downward adjustments within a period of one year imply a fiscal hit of Rs 2 lakh crore to state budgets. To put this in context, this amount is more than three times the spending on the Mahatma Gandhi National Rural Employment Guarantee Scheme.

What explains this? The Centre is constitutionally mandated to transfer a fixed share of the divisible pool of its taxes to state governments. This divisible pool does not include earnings from cess and surcharge (more on this later).

To be sure, not all of the downward revision in the Centre’s transfer to states in 2019-20 is because of revenue shortfall in the current fiscal year. More than one-fourth of the reduction is on account of the Centre missing its revenue targets in 2018-19.

While the Centre has taken two years to grasp its revenue shortfall for 2018-19, this is a big hit to states which must have provisioned for and spent this money already.

The net result of these miscalculations is an unprecedented retrospective hit on state finances.

In 2019-20, there is a more than 20% shortfall in what the states were promised in terms of tax devolution from the centre in BE figures and what they’ve got in RE figures.

This is the biggest shortfall since 2002-03, the earliest period for which RBI gives BE, RE and Actual figures for such transfers. 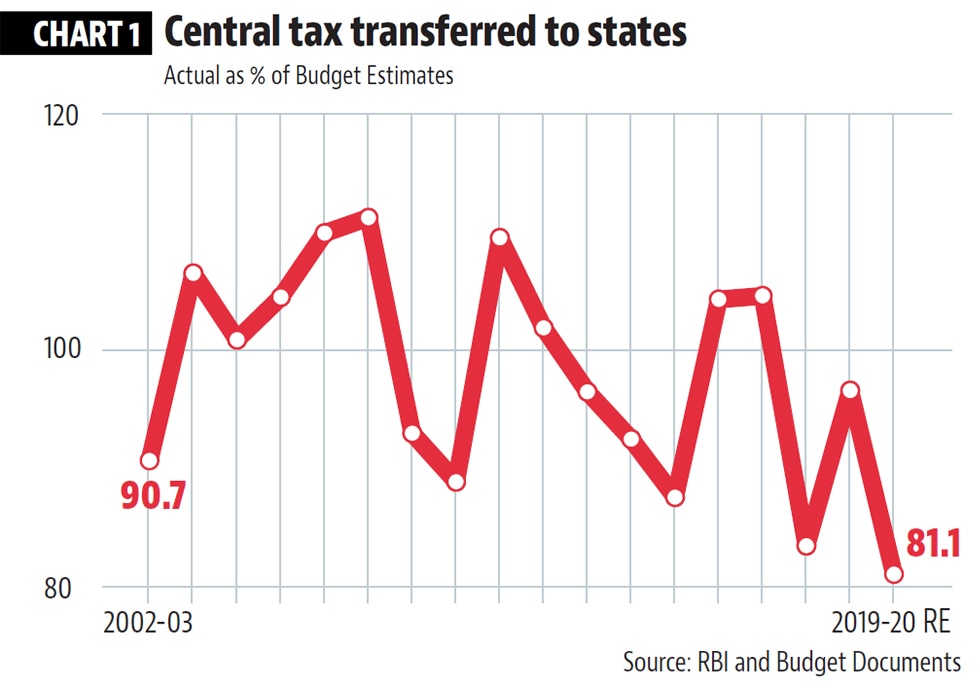 The revenue hit to states because of the Centre overestimating its revenue looks worse when seen along with the Centre’s attempts to squeeze the divisible pool of central taxes itself.

Research by ICICI Securities PD shows that the share of cess and surcharge in gross tax revenues of the Centre has increased significantly in the last few years. This means that even if taxes were to grow at the same rate, the divisible pool available to the states would be growing at a slower rate.

The fact that these developments have coincided with the roll-out of the Goods and Services Tax (GST), which has led to states surrendering a large part of their fiscal autonomy to the GST Council, is sure to make the pain even worse.