The ‘Baywatch’ star took to her Instagram account and shared how taking naps help her through the hectic schedule. The actor shared a quirky photo in which she is seen resting on a chair.
In the picture, the ‘Isn’t It Romantic’ star can be seen dressed in an olive green top, paired up with black trousers. The actor accessorized her look with a chunky gold necklace and opted for a minimal makeup look.
Taking a much-deserved break amid the hectic schedule, Priyanka shared that her secret to doing late-night talk show appearances in the US while living in London is taking ‘naps on naps on naps’.

The ‘Fashion’ star captioned the post as, “What’s my secret to doing late-night talk show appearances in the US while living in London you ask? #NapsOnNapsOnNaps.” 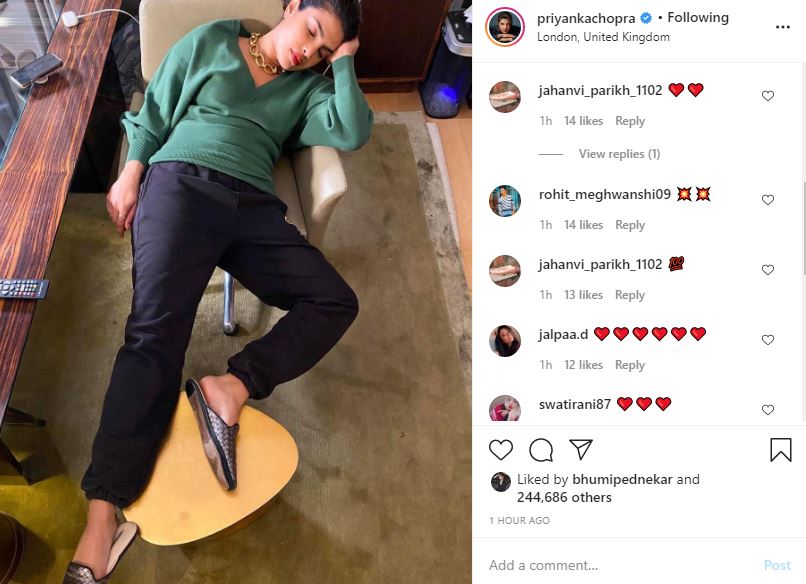 The actor’s celebrity friends including Bhumi Pednekar and more than 2 lakh fans liked the post within an hour of it being posted. Scores of fans chimed into the comments section and left heart and fire emoticons.

On the work front, the ‘Bajirao Mastani’ star will be next seen opposite Rajkummar Rao in the screen adaption of Aravind Adiga’s Man Booker Prize-winning novel, ‘The White Tiger’.

Directed by Ramin Bahrani of ‘Fahrenheit 451′ and ’99 Homes’ fame, ‘The White Tiger’ has been executive produced by Priyanka along with Emmy award-winning filmmaker Ava DuVernay. Priyanka will also feature in the upcoming romantic drama ‘Text for You’, directed by Jim Strouse.