The second edition of Uttarakhand women’s bike rally, organised by social organisation Trikon Society, was flagged off by governor Baby Rani Maurya on Friday. The rally saw participation of around 200 women from all walks of life.
On the occasion, Baby Rani Maurya said that a women’s bike rally under the theme ‘Drive to prove yourself’ is a meaningful effort. “Today, our daughters are achieving great heights and we are fast moving towards women empowerment,” she added.

In a similar vein, cabinet minister Harak Singh Rawat congratulated the women who participated in the rally and said that the women of Uttarakhand have made an immense contribution in the development of the state.

The top three positions in the rally were bagged by Shivani Sharma, Megha Raturi and Jyoti Chaudhary, respectively. All the three winners rode scooters and still managed to defeat those on bullets and motorbikes. Notably, 48-year-old Shivani, the winner of the rally, was participating in such a rally for the first time. She is a lawyer by profession. 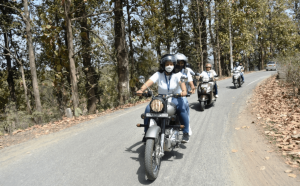 The winners were later felicitated by singer Jubin Nautiyal.
In particular, 55-year-old Chandrakala Bhatt hogged the limelight in the rally. Clad in a traditional salwar suit (tunic) with a dupatta (long scarf) wrapped around her head, she rode a scooty confidently with her 15-year-old granddaughter riding pillion for nearly 24 kilometres.
Neha Sharma, director, Trikon Society and vice-chairperson, FICCI FLO, Uttarakhand Chapter, said, “The aim of this bike rally is to appreciate and acknowledge the efforts of women and encourage them to come out and conquer the world. Women are an integral part of our society and they deserve respect and appreciation.”