The Recording Academy announced the nominees for the 64th Grammy Awards on Tuesday and among them was Taylor Swift for her 2020 album ‘evermore’.
As per People Magazine, last year, Taylor took home the coveted album of the year award for ‘folklore’.
In celebration of the honour, the singer-songwriter shared a video on social media of herself in an extravagant white gown, singing ‘Champagne Problems’ with producer Aaron Dessner on the piano.
In the black-and-white video, shot from above a winding staircase, the cameraman gets closer and closer as Swift sings the lyrics to her hit song while she sits on the floor in her gown.
“NO PROBLEMS TODAY JUST CHAMPAGNE,” Swift tweeted alongside the video. 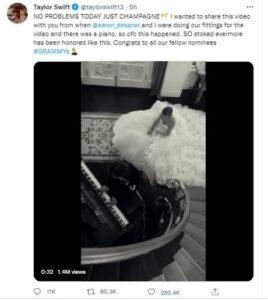 “I wanted to share this video with you from when @aarondessner and I were doing our fittings for the video and there was a piano, so ofc this happened,” she added, referring to her music video for ‘I Bet You Think About Me’, in which she donned the same white wedding dress.

She concluded with, “SO stoked evermore has been honoured like this. Congrats to all our fellow nominees!!”
Last year, Swift made history at the award show as the first female artist to have won the album of the year award three times — meaning that this year, she could break her own record.
On Sunday, Swift earned the American Music Award for the favourite pop album for ‘evermore’, and though she wasn’t present at the awards show, she gave her fans a shout-out in a prerecorded video.
“Thank you so much to the fans, this is such an amazing honour. The fact that you would do this for ‘evermore’, I’ve always been so proud of this album. I’ve always looked at evermore as sort of Folklore’s adventurous, fun younger sister. So, thank you so much for doing this,” Swift said.
Swift — who also won for favourite female pop artist — went on to thank fans for their support following the release of ‘Red (Taylor’s Version)’, which hit shelves on November 12, nine years after she initially released ‘Red’.
According to People Magazine, with her two wins, Swift extended her record as the AMAs’ most-awarded artist ever, with 34 wins over the years.
Swift recorded both ‘folklore’ and ‘evermore’ during the COVID-19 pandemic in Upstate New York. (ANI)

Prime Minister Narendra Modi has reached the Parade Ground in Dehradun. According to the information,