Bollywood star Kangana Ranaut turned a year older on Tuesday. Celebrating the occasion, the actor shared a motivational message for girls, encouraging them to chase their dreams and break social prejudices.
The ‘Queen’ actor took to her Twitter handle on the occasion of her 34th birthday and shared a long note talking about her achievements in life.

She tweeted, “They said a woman has a shelf life, this world only values young sweet 16 type girls with no brains, mature and wise woman can only belong to a household to a man who can give them a surname. They said many things it made me anxious, what will happen to me, where will I go.” 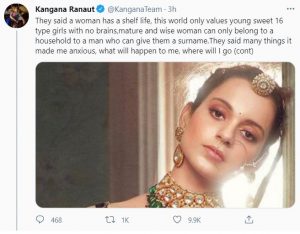 Kangana further said, “Today I turned 34, they never told me, I will be at the peak of my career at 34, I will be celebrated for my art and my experience will be valued and my age or marital status would mean nothing to anyone, I feel like a super human loaded with exceptional experience about skills.” 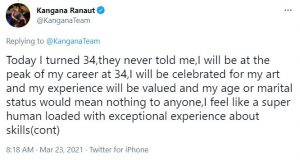 She then talked about body positivity and added, “I find certain ease with my body does not matter if I am too fat/too skinny, I like being sensual and feel at ease with my sexuality, I don’t get flustered with pimples or periods and no one has the power to make me feel bad about myself.”‘

“Fine lines and beginning of grey hair would look so soothing, it will enhance my character and and strength will become my beauty. So let me tell all you girls out there. It’s beautiful at 34 world looks super gorgeous from this view. Thanks to my mother who gave me birth,” she concluded. 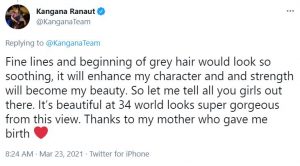 A day before her birthday, Kangana had won her fourth National Award at the 67th National Film Awards. She got the best actress award for her roles in ‘Manikarnika: The Queen of Jhansi’ and ‘Panga’.

On the occasion of her birthday, she will also be launching the trailer of her upcoming movie ‘Thalaivi’. The trailer of the biopic will be launched in two cities on the same day – Chennai and Mumbai.

The upcoming biopic is based on the life of iconic actor-turned-leader Jayalalithaa. Tracing the life journey of one of the most influential women in Indian politics, the film has been grabbing eyeballs ever since its inception.

The movie will be presented by Vibri Motion pictures, Karma Media Entertainment, and Zee Studios in association with Gothic Entertainment and Sprint films. It has been produced by Vishnu Vardhan Induri and Shailesh R Singh and co-produced by Hitesh Thakkar and Thirumal Reddy.

The Kangana Ranaut-starrer is set to release worldwide in Hindi, Tamil, and Telegu by Zee Studios on April 23, 2021. (ANI)

ZEPP is the next innovation for consumer outreach

Zeitgeist Retail Pvt. Ltd. (ZRPL), a Bengaluru-based e-tailer and service provider to the e-commerce industry, has announced the launch