Bollywood actor Kangana Ranaut on Monday dedicated the International Yoga Day post to Lord Shiva and thanked him for blessing humanity with this precious art.

The ‘Thalaivi’ star took to her Instagram handle and posted a throwback picture from her visit to Coimbatore’s famous Adishakti Ashram.

Alongside the serene picture that sees Kangana posing in front of the majestic Lord Shiva’s statue, she wrote a caption that read, “On this auspicious occasion of #internationalyogaday I want to thank and remember the one and only Guru of all Gurus, the first Yogi, the celestial being who was called Yakshroopa which also means an alien who came from elsewhere on this planet to give humanity the gift of knowledge.”

Kangana continued, “That yogi who gave us the gift of Yoga was called the Aadiyogi means the very first yogi…. Also known as Lord Shiva. He does not get enough credit for his contributions to humanity even though he continues to prevail among us through his many gifts like Yoga.I bow down to him and thank him for giving us the gift of Yoga through Sapt (Seven ) Rishis…. #internationalyogaday Om Namah Shivaya.” 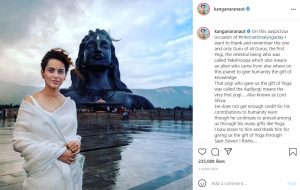 This picture of Kangana is from her 2018 visit to the centre when she was shooting for one of the biggest projects of her career- ‘Manikarnika: The Queen of Jhansi’.

Adiyogi is located at the Isha Yoga Center. Its height, 112 ft, symbolizes the 112 possibilities to attain moksha (liberation) that are mentioned in yogic culture, and also the 112 chakras in the human system. The Indian Ministry of Tourism has included the statue in its official Incredible India campaign. It was inaugurated by the Prime Minister of India, Narendra Modi, on the occasion of Maha Shivaratri in 2017.

Speaking about International Yoga Day, it was proposed by PM Modi in his speech at the United Nations General Assembly (UNGA) on September 27, 2014.

It is observed on June 21 every year to spread awareness about the importance and effects of yoga on the health of the people. The word ‘yoga’ is derived from Sanskrit which means to join or to unite.

Meanwhile, on the work front, Kangana’s upcoming movie projects include ‘Thalaivi’, which is based on Tamil Nadu’s former Chief Minister, Jayalalithaa. She also has ‘Tejas’ and ‘Dhaakad’ in her kitty. ‘Manikarnika Returns: The Legend Of Didda’ is also in pipeline. (ANI)

There is a piece of good news for Apple Music listeners on Android, as they can now