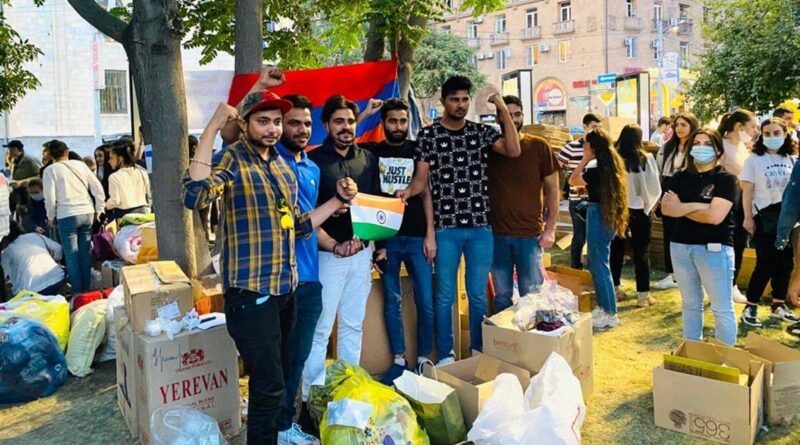 Since fighting broke out on September 27 between Armenia and Azerbaijan in Nagorno-Karabakh, the Australian Strategic Policy Institute, a non-partisan think tank began noticing Indian social media accounts expressing support for Armenia with hashtags like #IndiasupportArmenia and #indianswitharmenia. On the opposite side, reflecting Turkey and Pakistan’s support for Azerbaijan in the three-decades long conflict, were Pakistani and Turkish accounts pushing their own hashtags.

It shouldn’t come as a surprise, says Achal Malhotra, who served as India’s Ambassador to Armenia and Georgia between 2009 and 2012, because of the historical ties between the two countries. The earliest presence of Armenians in India can be traced to the late 8th century and for years Kolkata has been home to the country’s Indian-Armenian community. Historians attribute much of the city’s development, and the establishment of some of its most iconic educational institutions to the Armenian community, and that is only scratching the surface of the community’s contributions.

Soon after fighting started in Nagorno-Karabakh, Pakistan openly extended support to Azerbaijan, with its foreign affairs ministry saying: “Pakistan stands with the brotherly nation of Azerbaijan and supports its right of self-defence.” Hence trending hashtags in support of Azerbaijan from Pakistani social media accounts are not unusual, say long-time watchers of the region. “Azerbaijan has been very nasty to us on the Kashmir issue,” says Malhotra, unwinding the complexity of diplomatic relations between New Delhi, Islamabad and Ankara and where they fit into this conflict in a region so far away.

“We have been trying to build Indo-Armenian relations for years and now thanks to Erdoğan, we have been able to,” says Karen Mkrtchyan, a member of Bright Armenia, a political party founded in 2015. He points to Turkey’s support of Azerbaijan in the Nagorno-Karabakh conflict and its historically poor relations with Armenia, primarily due to Ankara’s lack of acknowledgement of the Armenian Genocide. “Erdoğan’s anti-India stance regarding Kashmir has made people focus on negative historical antecedents. So this has led people to come out in support of Armenia, who may have just learned about the country,” explains Mkrtchyan of Indians rallying behind Armenia, not just on social media, but also on the ground.

Three days after fighting broke out in Nagorno-Karabakh, 21-year-old Sanjay Yadav, a student at Armenia’s St. Tereza’s Medical University, took six friends to Yerevan’s Republic Square to donate food and water for Armenian soldiers on the frontlines and to stand in solidarity with the country. “Armenia is our second home. We live well here and we have good friends. We have good relations with the Armenians,” he says. “We are doing this as a humanitarian gesture.” Large screens broadcast videos of Armenia’s military band performing victory songs in Yerevan’s Republic Square, days after the fighting started in Nagorno-Karabakh. Below the video, the phrase ‘We will win’ is written as a hashtag in Armenian. (Credit: Pragnesh Shah)

When people who were displaced from Karabakh started coming into Yerevan, Yadav and his friends stepped in to help with providing food, like others in the Indian community. “They are homeless; their homes have been destroyed there. All Indians are like this. No matter where we are, we help people in need,” he says. “We are doing whatever little we can for them.”

Although there are no official figures available, Parvez Ali Khan, 47, who runs Indian Mehak Restaurant and Bar in the capital, and has been providing packages of cooked food to displaced people, believes that in the capital alone, there must be around 100 Indian families. Approximately 4,000 Indian students are studying medicine in universities across Armenia, he says, although many had left when the Indian government started operations of Vande Bharat flights to help citizens overseas return home during the coronavirus pandemic. Armenians in Yerevan’s Republic Square, busy collecting donations to send for their soldiers on the frontlines. (Credit: Pragnesh Shah)

Pro-Armenia sentiments are strong among Indians living in that country. “If you live in a country for a long time, you become a part of it,” explains 48-year-old Pragnesh Shah, a diamond manufacturer. “The Indians who live here feel they are a part of Armenia.” Before Shah first moved to Yerevan from his hometown Surat, Gujarat in 2014, he hadn’t known that Armenia was a country. “I used to say, ‘send the diamonds to Lori’,” he explains, referring to one of Armenia’s most prominent diamond-cutting plants.

Back then he would associate the company’s name with that of the country. Six years on, Shah knows Armenia better than most Indians living there, and is deeply involved with the activities of the Indian community in the country. “Armenians are very peaceful people and they can die for their country. Indians only think about their motherland on January 26 (Republic Day) and August 15 (Independence Day), but they think about their motherland all the time,” he says. Close to Yerevan’s Republic Square, children sell their toys to generate funds to donate to Armenia’s military. The placard in Armenian says: “All money from this sale goes to the army fund.”

Days after Armenia declared martial law and initiated total military mobilisation, while walking down Yerevan’s streets, Shah says he has been seeing large numbers of Armenians gathered in public spaces, either in line to register to serve in the army or to collect donations for soldiers. “Not everyone is going to fight, but they are doing something to help. Young people, old people are sitting with collection boxes in public places.”

Although just a few thousand in number, residents say that the Indian community in Armenia have also been doing their bit to help. The Yerevan branch of the Indo-Armenian Friendship NGO, an organisation that works to develop India-Armenia cultural relations, has been at the forefront of these initiatives, and has been helping to collect supplies to donate to the Red Cross to be forwarded to Karabakh. Dipali Shah has been making batches of magaj, a dry Gujarati sweet made of gram flour, ghee and sugar, to be sent to Armenian soldiers. (Photo credit: Pragnesh Shah)

While Shah has been assisting with collection efforts in the community, his wife Dipali has been contributing in her own way, making large batches of magaj, a dry Gujarati sweet made of gram flour, ghee and sugar, to be sent to the soldiers. “The Armenians love Indian food. I knew they liked magaj and I had made it before for Armenian friends. So that is why I made it for the soldiers. (Magaj) gives energy,” she explains.

Through the Indo-Armenian Friendship NGO, the Indian community has also been working on starting a fundraiser for Armenia for people who want to contribute from India. The Indian community’s support is nothing new, Shah says. “Back in 2016, when the Four-Day War happened, I’ve seen similar scenes in Yerevan.” 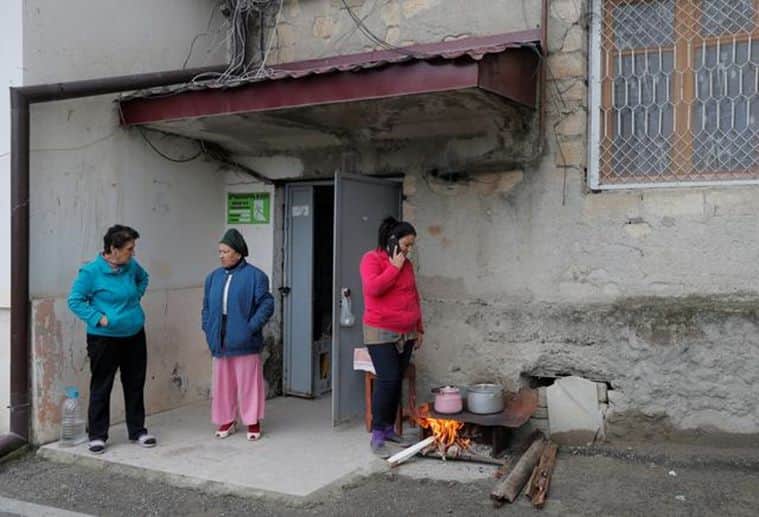 Women stand next to an improvised oven placed outside an apartment building during a military conflict over the breakaway region of Nagorno-Karabakh, in Stepanakert October 7, 2020. (REUTERS/Stringer)

Four years ago when fighting started between Armenia and Azerbaijan, Abhishek Somvanshi was in Stepanakert, the de facto capital of Nagorno-Karabakh. “All of a sudden one day, war broke out.” When Somvanshi, 37, had first arrived from India, his employer, a multinational engineering company, appointed him country head and posted him in Karabakh, where he was the only Indian. “Skirmishes would happen on the border, but people always said war would never happen. On normal days, Stepanakert is a beautiful city, with mostly Armenians who live there.”

Although tanks and soldiers in Stepanakert have always been a common sight, he believes that the ongoing situation is more severe. Now a resident of Yerevan, Somvanshi still has friends and colleagues who live in Stepanakert and he can only watch the city’s devastation through photographs and videos that they send to him. “That beautiful city has been destroyed. Locals who are my good friends have said that the city has changed,” Somvanshi says.

On October 2, Azerbaijani forces began to hit Stepanakert, emptying streets, forcing shops and cafes to close and compelling people to stay indoors. An Amnesty International report said analysis of footage showed that Azerbaijani forces were using Israeli-made cluster bombs in Karabakh that are particularly dangerous for civilians. Updated figures were not immediately available, but the de facto Nagorno-Karabakh authorities had reported that 19 civilians, including one child, had been killed as of October 4. Most recently, the Holy Savior Cathedral, also called Ghazanchetsots, a 132-year-old Armenian Apostolic cathedral, was also heavily damaged due to shelling by Azerbaijan forces.

“My colleague who is in Stepanakert right now said it has seemed as if large fireworks had been set off,” Somvanshi says, of the first day when the city was shelled. This time, the circumstances are visibly different, he says, more serious than what it was in 2016.

“It is qualitatively different this time,” agrees Malhotra. He believes this is in part because the conflict has been attracting thousands of Islamist radicals who are fighting against Armenian forces. On October 6, Reuters reported Sergei Naryshkin, the head of Russia’s SVR Foreign Intelligence Service, saying that people whom he described as mercenaries and terrorists from the Middle East were arriving to fight in the conflict.

According to Reuters, Naryshkin had specifically named the militant group Hayat Tahrir al-Sham, active in Syria, along with the Firqat al-Hamza, the Sultan Murad Division, and other unnamed extremist Kurdish groups. Following accusations from Syria’s Assad that Turkey was sending mercenaries to fight for Azerbaijan in the conflict, Ankara had issued a denial. Aftermath of recent shelling during a military conflict over the breakaway region of Nagorno-Karabakh in Stepanakert October 4, 2020.

While some Indian nationals both in India and Armenia, have openly expressed their support for Yerevan and Nagorno-Karabakh, Malhotra believes the Ministry of External Affairs has “taken a very calculative, balanced, neutral view”, regarding the conflict. “India is concerned over this situation which threatens regional peace and security. We reiterate the need for the sides to cease hostilities immediately, keep restraint and take all possible steps to maintain peace at the border,” the External Affairs ministry had said in its statement.

Despite the Indian government’s cautious stance regarding the conflict, many Indian nationals have not hesitated in backing Armenia, even if they don’t have any particular association with the country. For Indians living there, however, it is really a matter of supporting the place they now call home. “We have been living here for so many years, so I wanted to do something for them. You keep hearing of someone who has died or been affected (due to the recent fighting),” Somvanshi says. “All Indians are doing something to help Armenia, but some are just not visible.”

Shah says he still wants to do more for the country. With his wife, he has plans to visit supermarkets over the next few days to buy more essentials that they can send as donations for Armenia’s soldiers. “It is a country that you can’t help but love.” 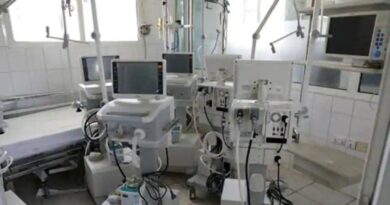 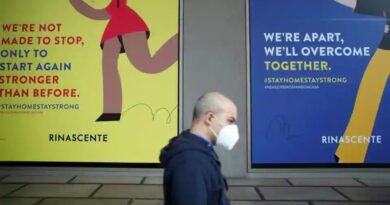 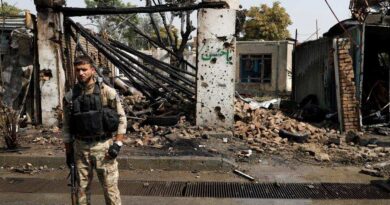