Weeks after registering a sudden bump in cases and leading the world in daily case load, the number of new COVID-19 cases in India has shown a consistent dip in the past week — from a seven-day rolling average of 3.92 lakh as on May 8 to 3.41 lakh on May 15. There was also a drop in the test positivity rate (TPR: number of positive cases identified per 100 tests) that fell from 22.6% to 19% in the same period. 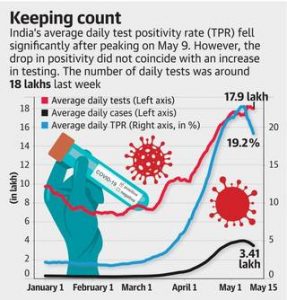 While these figures suggest that India’s second COVID-19 wave is on the wane, a look at data using three parameters — the TPR, average daily cases and average daily tests over time — shows that the drop in cases was not accompanied by an increase in testing. In fact, the number of tests carried out remained stable at around 18 lakh per day even as TPR reduced after May 8.

Breaking the data down for States also shows that the COVID-19 picture is not uniform across them. While some States managed to bend the COVID-19 daily cases curve, others achieved a peaking of cases by decreasing the number of tests conducted.

At least 11 major States have reduced their testing levels recently. Of those 11, in four States, the positivity rate is on the rise. Lowering the number of tests would mean missing out on identifying a number of infected people even as the COVID-19 graph would show an “artificial peaking”.

In States such as Andhra Pradesh, Assam, Karnataka and Rajasthan, positivity rate has been on the increase, even as number of tests have decreased. This is not an optimal strategy for the States as reported infections have been kept low due to low testing and an “artificial” peaking of cases has been depicted.

In Maharashtra, Telangana, Uttarakhand, Jammu and Kashmir, Gujarat, Goa and Delhi, on the other hand, both the testing rate as well as the positivity rate is on a decline. While these States are better off than the previous set, data indicates that they should maintain their testing rate instead of letting it fall to ensure that the share of positive cases are not going down due to decreased testing levels.

Bihar, Chhattisgarh, Haryana, Jharkhand, Madhya Pradesh, Uttar Pradesh and West Bengal are States where positivity rate is falling even as testing levels increased, suggesting that these States are following an optimal testing strategy. However, in rural areas in the States in the north, there are anecdotal reports that testing has been minimal, which brings into question the actual spread of cases.

20 years of ‘Gadar’: Sunny Deol expresses gratitude to fans for turning film into an event

On the anniversary of the Singur Land Rehabilitation and Development Bill 2011, West Bengal Chief