After Prime Minister Narendra Modi announced the repealing of three farm laws, actor Kangana Ranaut expressed her views on the same, and it seems like she is disappointed over the government’s decision.

Taking to her Instagram Story, Kangana shared a netizen’s post that read, “Street power is the only power that matters, hence proved. #farmersprotest.”
Reacting to the particular post, Kangana wrote, “Sad, shameful, absolutely unfair. If people on the streets have started to make laws and not the chosen government in the Parliament, then even this is a jihadi nation. Congratulations to all who wanted it like this.” 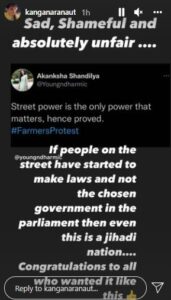 Alongside the picture of Indira Gandhi, she wrote, “When the conscience of the nation is in deep sleep, lath (the cane) is the only solution and dictatorship is the only resolution… Happy birthday Madam Prime Minister,” she wrote.

Friday marks the 104th birth anniversary of the former PM. 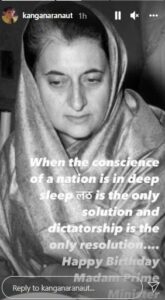 On the occasion of Gurpurab on Friday, Modi announced that his government would repeal the three farm laws passed by Parliament a year ago, which has led to massive protests by farmers unions in several states.

Farmers have been protesting the government’s three farm laws since it had passed the Farmer’s Produce Trade and Commerce (Promotion and Facilitation) Bill, 2020, and the Farmers (Empowerment and Protection) Agreement of Price Assurance and Farm Services Bill, 2020. (ANI)

Dehradun-based multi-disciplinary university, UPES, has launched 'Runway', its biggest incubation program to work with start-ups within

Ahead of the upcoming Uttarakhand Assembly elections, Prime Minister Narendra Modi is likely to hold a public rally in the